Korina Wood in the UK 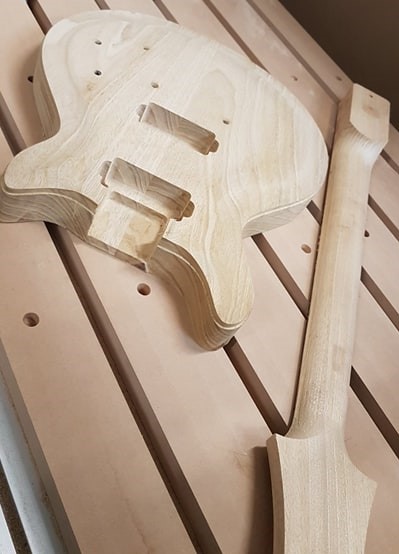 Korina Wood in the UK

Finding real Korina in the UK can be difficult, and when I last bought some, although African in origin, it came from a US supplier. But I wanted to have a small chat about Idigbo. I have used Idigbo for bodies and have just made a couple of matching necks and must confess I do like the light weight and relative ease of working with it. I know several UK luthiers call it Korina, but there is definitely a bit of a grey area. Here is my current understanding, and take on it.

Korina was first quoted as a name by the big G in the USA to describe Terminalia Superba, which is often also sold a Limba or Afara.

White Limba is your typical “nice” clean wood associated with a few groovy modernistic designs from the late 50s.

Black Limba is a name used for the wood often but not solely harvested from the lower buttressed part of the same tree, more likely to be presenting dark streaks or markings that make it imperfect but more decorative. The Superba can reach 50+metres and while the main trunck is very plain, the base is buttressed to reinforce it. Changes in colorations are possibly due to localised toxin build up and stresses, insect attacks and fungi.

Black Afara on the other hand, is another tree altogether from West Africa that has nice clean grain of pale golden hue and gets its “Black” name due to it’s darker colored tree bark when compared to the bark of a regular Afara. It’s proper name is Terminalia Ivorensis and this is the wood sold in the UK as Idigbo. These may also have buttressed truncks but are likely to grow only to about 30+ metres

Both the species (Superba and Ivorensis) are from the “Combretaceae” family.

So Idigbo is the same Family as Korina, but not the same Species. I have heard that Idigbo might leach out some of it’s golden yellow colour into a finish, but must confess that I have not experienced this myself, using sealers. I have now seen several references by UK luthiers to Korina when they are actually using Idigbo. Some prefer calling it Korina Idigbo, which is probably a fairer compromise as it reflects the intention as well as the reality, and is in my opinion the best way to describe it to guitar enthusiasts.