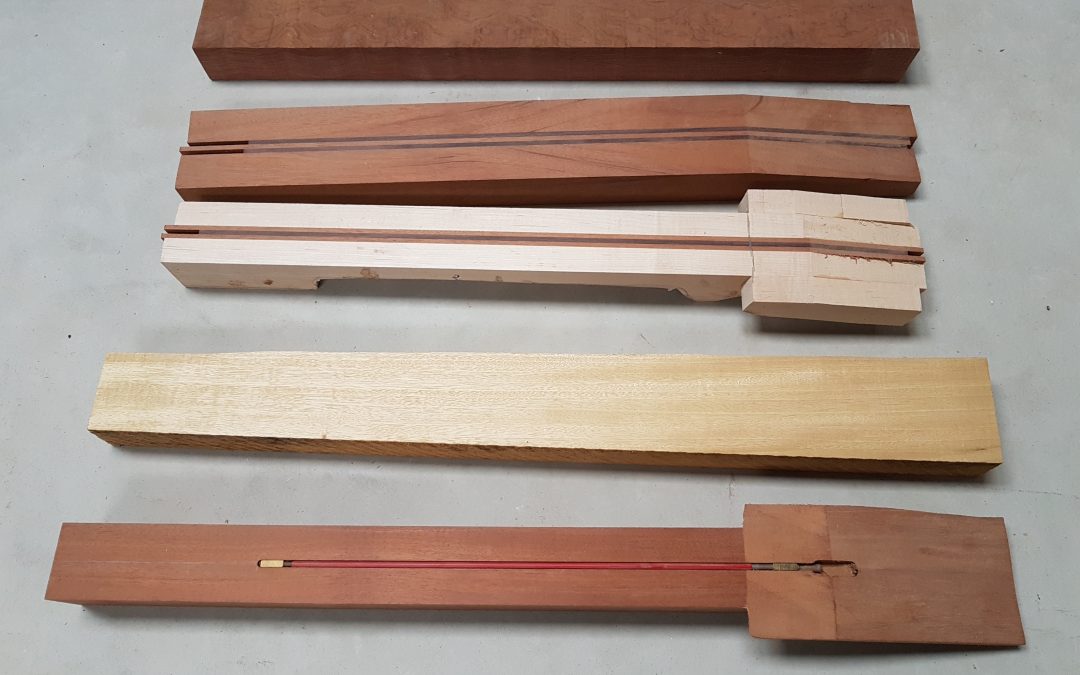 Laminate or one piece neck construction?

Many necks used in guitar construction are best described as one piece, be they with or without a separate fingerboard and thousands of great guitars have been built this way.

The best known 1 piece neck is probably the one featured on the Fender Telecaster which can claim to have perfected this simple design. The T style neck is of Maple construction, known to be a strong and stable material, was machined from a 1” blank wide enough to fit a slim headstock without a back angle nor even the need for a separate fingerboard. I have owned a couple and appreciate its design purity. Grain orientation does play a role and quarter sawn as opposed to flat sawn necks are often considered as stiffer and better. But the vast majority of commercially available guitars feature flat sawn necks that perform well enough to be of no issue.

So why do so many argue the benefits of laminated necks while others point at the historical evidence that there is no need for them or even that they are a bad thing? There is some interesting historical background to this. When large scale electric guitar manufacturing moved to the Far East, the local producers looked at sourcing local timbers, and struggled finding the same as what had been used by the large US brands. Using laminate construction allowed them to use smaller or weaker stock that they could build up to the right size and strenght. I think many who have cut and glued wood will confirm that this process also adds some rigidity, so I believe the main concern was material availability. When labour is cheap, the cost of lamination outweigh the cost of sourcing larger & stronger stock pieces. The appearance on the US market of cheap(er) import guitars that also featured cheap and inferior parts, pickups and components while featuring laminated necks, contributed to the negative association.

Also of note was the contribution made by Gibson in the 70’s, who on the one hand was competing domestically with the comparatively half price Fender guitars as well as being challenged by cheap imports and copies. Gibson was looking at ways to increase market share and cut costs under new management ( a time referred to as the Norlin era) and also introduced maple and 2 piece necks as well as pancake and multi piece bodies. Their manufacturing “improvements” led to changes and struggled with poor QC, inconsistent craftsmanship  and some unflattering customer comments. Another negative association was created. But it would be fair to point out that the laminated necks in themselves or multi piece bodies where hardly the cause of the problems.

It is interesting that many makers involved with premium instruments also chose to experiment and often adopt multi piece neck construction. When looking at the custom Jazz guitar or Bass guitar markets, 3 or 5 piece necks feature heavily. Some of the reasons given are as follows:

All other ingredients being equal, a laminated neck offers more stability and stiffness, reduces the likelihood of dead notes, improves tone evenness and response, improves resistance to warpage and twists etc….but it’s also more expensive because when used as a way to enhance an otherwise good design built with quality elements, you are adding extra work. And skilled labour at that. A 5 piece neck has 8 surfaces that need to be sized, cut planed and glued before the resulting block can even be prepared for becoming a neck. Compare that with using a 1 piece neck that just needs to be squared once before being ready to start its journey to becoming a neck. It’s not surprising that even premium priced large volume production manufacturers would rather spend a bit extra on wood selection rather than get involved in the extra work, labour and cost required in producing good laminated necks. In fact, if I am allowed to disgress, there is a real skill in selling a simpler cheaper process as a premium product ( check my article on natural or “fake” binding for more on that topic) so be suspicious if a manufacturer only/mainly offering one piece necks claims that they are somehow better with extra pixie mojo dust. The guitar manufacturing world is full of myths, some intentionally promoted by manufacturers and repeated infinitum by enthusiasts.

In many practical applications, lamination has proven time and time again to be superior to using a single piece construction. But in terms of 6 string electric guitar, it’s certainly not a necessity but rather another very useful tool. It would be delightful to give a more definitive answer and work with absolutes, yet I don’t believe in there being such a simplistic solution. Rather it is probably best to be informed and make a choice depending on preferences, application and taste. Reassuringly, you are unlikely to make a wrong choice as long as you use quality materials and craftsmanship and are willing to bin the odd 1 piece neck blank that just won’t behave.

Telecaster and Leo Fender, Gibson and all other trademarks referred to in this article are acknowledged and their use does not imply any affiliation with this web site, the author of the article, Hucke Guitars or any other party.