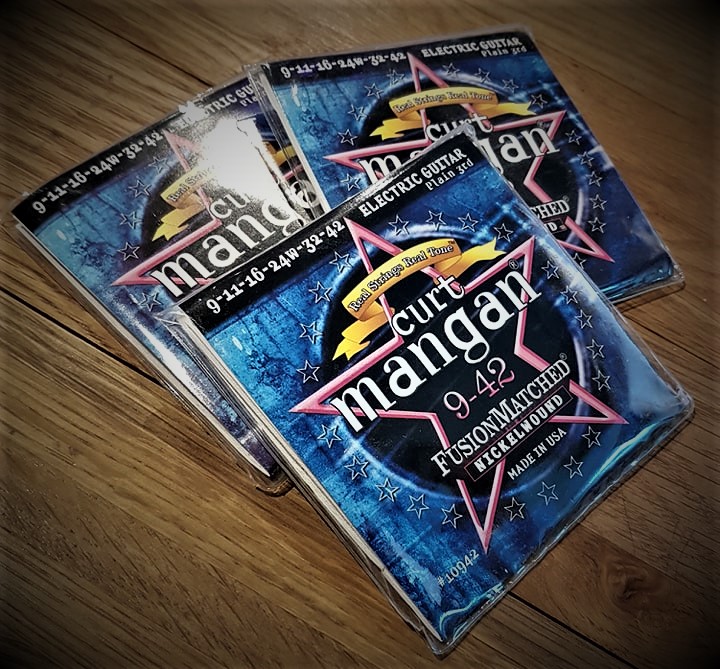 When I first picked up a guitar and practiced in earnest, it wasn’t the summer of ’69 but my fingers did bleed.

In due course even casual guitar players develop small calluses on the fingertips that make it easier and less sore to play, but there is very little doubt that thinner and slinky-er strings help a lot. Less strength is required to get a fretted note and to bend the string on a smaller gauge set.

To get a note at a specific pitch on any stringed instrument, there are 3 main factors involved. For a specific lenght of string in play, a combination of string size and string tension will vibrate at a given frequency.  This is the pitch we hear.

We can alter the pitch by changing any one of those 3 elements as follows:

So how does this impact on string gauge choice?

If you have already a guitar like a fairly standard “F” type bolt-on or a derivative, chance are the scale length ( the part of the string between the nut and the bridge) will be about 25 1/2″ mark.

You can not change the scale length of your instrument, but comparing the “S” and “G” type guitars, if you use the same “gauge” of strings and tune up in standard fashion, then the guitar with the shorter scale length will have less string tension, making it feel easier to play.

You might then wonder why doesn’t everyone play with the thinnest gauge available?

Here are some of the reasons given by musicians who prefer thicker strings, going even as far as playing 11s or 12s :

I believe that it’s fair to comment that these reasons all sound valid. And then I am reminded of an interview with Billy Gibbons (ZZ Top) who previously played heavy gauge string. He recounted a conversation with BB King where the King of Blues asked him why he was working so hard. Billy Gibbons now plays 7’s. Noone would accuse him of having no tone.

Brian May is another player who’s preference has been for string gauges between 8s and 9s at the heaviest, even having some lighter 7s gauge sets made for him. As his own handbuilt guitar only has a scale length of 24 Inches, you can imagine how light they must feel. But the Red Special as his guitar is known, just sings beautifully under his control.

Black Sabbath’s Tony Iommi is a player known for his heavy riffing that created a whole new genre. Following an industrial accident, he lost the tips of his index and middle finger, made his own prosthetic replacements and went on to have an amazing career creating “Metal” along the way. His most distinctive string gauge isn’t even a standard set but consists of strings 0.008 – 0.008 – 0.011 – 0.018 – 0.024 – 0.032, tuned down to D#Standard on a guitar that has only a 24 3/4 inch scale length.

My own preference has generally been for string gauge 9-42 for ease of play on a 24 3/4″ guitar. I am simply nowhere near good enough to start worrying about how much better or not 10s or 11s might sound.